A bit of fluff 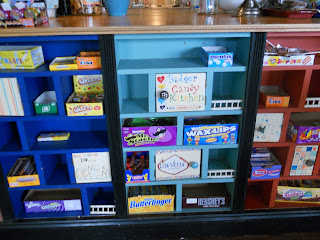 My piece on local candy here. Oh, the sweet days of summer! Only now you need to save an entire summer's allowance to buy a bag.
Posted by Candy Yum Yum at 8:48 AM No comments:

I've learned over the years that writing about candy is a good way to a) keep your cupboard stocked  with sweets and b) ensure that you'll never lose weight, but it's not the best way to fund a lavish lifestyle of random dollar store visits and twice-a-year haircuts. No, for that, I write a weekly newpaper column about, well, food and booze. So I've got all three food groups represented in my writing portfolio. In any case, for this week's newspaper article, I decided to write about candy, since June is National Candy Month. I'll post my dissertation here after it goes to print. But check out this treasure I found outside one of the candy stores I visited: 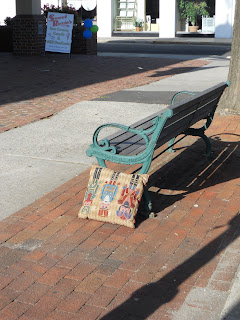 A Nutcracker pillow. In June. On the sidewalk. I don't know about you, but I know that when I go walking downtown, I always like to take a festive pillow with me, just in case I start feeling a little snoozy. I had a grand vision of photographing the pillow's progress (would someone move it to the bench? Would it get kicked to the curb?), but when I went back the next day, it was gone.
Posted by Candy Yum Yum at 9:34 PM 1 comment:

Let's try this whole "aerated" chocolate thing again, shall we? A couple of weeks ago I posted about the new Hershey's "Air Delight" Kisses. I wasn't thrilled with them. They seemed too small to get that whole air-n-chocolate experience. Plus, after I ate a few more, I realized that the paper flag kept sticking to the Kiss and I'd have to extract it from my mouth. Not fun. 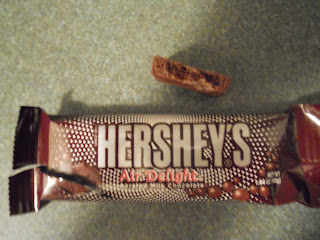 Since then, I stumbled upon the Hershey's Air Delight bar at Walmart. I wasn't particularly excited, given my disappointment with the Kisses, but I figured, here goes nothing.
Much, much better. If you're going to do air, this is the way to do it. Because the bar was more substantial, you could actually see the bubbles and experience the combination of chocolate with that melty, texture thing that happens from the bubbles. I enjoyed this. However. (You knew there had to be a however.) This is plain old Hershey's chocolate, like you'd get in a regular bar, which weighs 1.55 oz. The aerated version is 1.44 oz. So I'm getting less chocolate because ....? I'm certainly not paying less. Am I the only one who feels like I'm being a bit duped here?
Posted by Candy Yum Yum at 8:28 AM 2 comments: 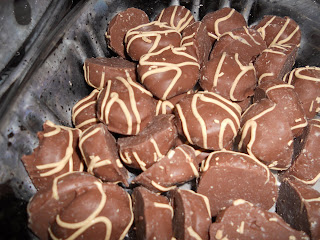 I'm trying to figure out how to write this post without totally offending a certain candy company while giving a left-handed compliment to another. There's no easy way around it. I'm just going to have to dive in and suffer the consequences.

There are some confections in the candy world that get mocked. Often, it's because they're made of "mockolate," or fake chocolate. These greasy, oily chocolates are often very inexpensive and holiday themed. I avoid these like the plague.


So when I recently received a large box full of samples from what I thought was the offending company, they sat around for longer than usual before I actually tried them. Then, one night, desperate for something sweet, I popped open a box of Palmer's Peanut Butter Crispy Yums.
I was shocked. They were tasty! They weren't at all the mouth-coating, flavorless chocolates I feared. I looked at the ingredients. Real milk chocolate. Real peanut butter. Real molasses. (And yes, admittedly, some partially hydrogenated bad stuff, too.) But the taste was there. The little pillows were filled with smooth peanut butter studded with little crispy bits. I was impressed. This company seemed to be taking a step in the right direction.
But then I looked at the logo. It didn't seem right. No, something was amiss. I did some Googling.
Holy cats.
After all these years, I've been confusing two candy companies. There's Palmer's Candies, out of Sioux City, Iowa, and R.M. Palmer out of Reading, Pennsylvania.
Oh my.
So, here it is, folks, my admission of guilt and my apologies for any negative "Palmer" references. Please tell me I'm not the only person in the candy universe who's made this mistake. On the bright side, there are two other types of candies waiting to be sampled. I hope they're as good as the Crispy Yums.
Posted by Candy Yum Yum at 10:00 PM 4 comments: