Let the countdown to Christmas begin! I'm going to start posting some ideas for holiday gifts here, so let me know if you have any ideas or are looking for something specific. In the meantime, here's Gift Idea #1 for Christmas 2011: 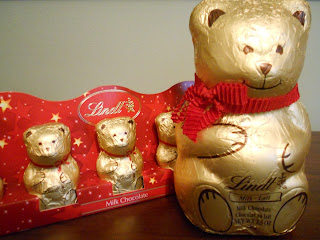 Lindt Bear
I think these bears are adorable and make great gifts because a) they're good-quality chocolate, so they feel like a real gift rather than just some last-minute purchase and b) they're a nice price (around $4 for the big bear). I was sent some samples from the company, and I fully intended on putting the little bears in the Sugar Baby's stocking. (You know, in case Santa forgets the chocolate.) But one night I heard the sweet Siren call of the chocolate bears and I couldn't resist. Oh yes, there was plenty of chocolate in the house, but for some reason, a little hollow bear seemed to be just the thing I needed. I was quite surprised when I peeled back the foil and was just overcome with the most perfect, intense chocolate aroma. It was like the good old days at the chocolate shop when I'd come home from work and sniff my hair which was permeated with the smell of cocoa. I thoroughly enjoyed my little bear, so much so that there aren't any left. Looks like Santa had better remember to bring some more with him.
Posted by Candy Yum Yum at 9:05 PM 3 comments: 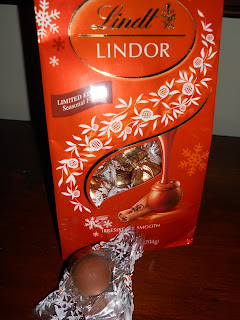 There's definitely been a void in the confectionery department when it comes to Thanksgiving. It seems like every holiday has at least one special candy to call its own, but Thanksgiving has always been lacking. Not any more. Check it out, Yumsters. First, we have Lindt Holiday Spice truffles.
Let me just say that I love cinnamon. It's my favorite spice. But, like pumpkin, I've never really found it to be a good compliment to chocolate, so I was a little afraid to try these truffles. I feared they would taste like a Yankee Candle.
No worries, though. These are a nice balance of Lindt's sweet, creamy chocolate and just enough spice to make it interesting. These would be great for the Thanksgiving table. 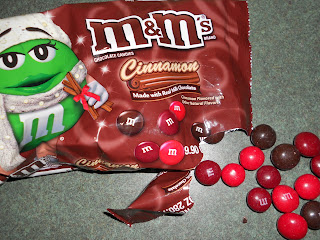 I was in Target the other day and was surprised to find Cinnamon M&M's. As is often the case with Limited Edition M&M's, these are larger than Plain M&M's. The colors are pretty fall-inspired oranges and browns. Again, I was afraid they might be too cinnamony, but in fact, they were nicely balanced. I wouldn't call them subtle, but they weren't in-your-face, either. My mother-in-law gives them two thumbs up. Mr. Goodbar, on the other hand, feels that all Limited Edition candies are an affront to candy world. He likens it to cable tv. Too many channels (or in this case, flavors). "They're diluting their own brand," he says. I can't say I disagree, but it's also fun to try something new.
What will you be serving as your Thanksgiving chocolate?
Posted by Candy Yum Yum at 6:22 PM No comments:

Thank God it's over with 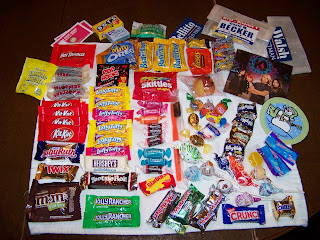 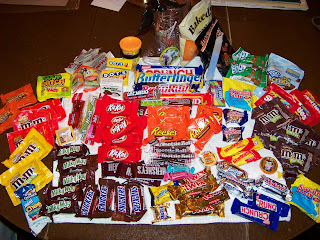 As you may recall, last year my friend Alexandra found some interesting stuff in her kids' trick-or-treat bags. My favorite is the empty Scooby Doo bubble bath bottle. This year was nary so interesting. Lots of political stuff, and a Kicking Daisies CD, but the rest was all pretty mainstream. They did score quite a few full-sized bars, though.

So that about does it for Halloween 2011: The Horror Story.

How did your Halloween stack up?
Posted by Candy Yum Yum at 6:03 PM 1 comment:

You didn't really think we'd stay in on Halloween, did you? Despite the odds, we decided we were going to keep up with tradition and do all of our annual Halloween activities. So after the downtown trick-or-treat, it was off to my parents' house to show off the mummy costume (and score a Russell Stover Chocolate Marshmallow Pumpkin). Then, onto the church to visit Father John! 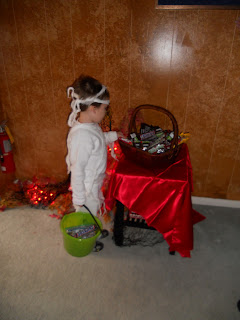 As you may recall, last year 186 kids visited the church to get a full-sized candy bar. Every year, Father John tries to beat the previous year's record. He said he was hopeful that this year would be good, since school was closed and people were anxious to get out of the house. But since it was weird with the snow and all, it was questionable whether the turnout would be good or not. 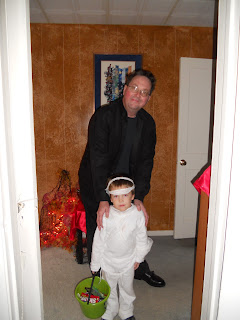 Just a side comment, here. Father John does a great job of setting the scene in the rectory. There were candles burning and Gregorian chant playing on the stereo. He had cheese and crackers set out for the adults, a really cool frame that displayed old timey candy bags and-- you've gotta love this-- a table decorated with spooky stuff, including a copy of "The Exorcist." Now that is funny! 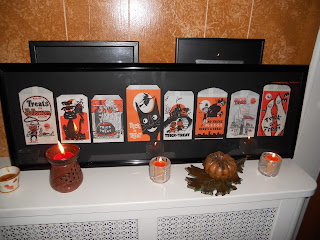 Of course, the focus of it all was the big basket filled with not just full-sized candy bars, but KING sized. Nice, right? He let the Sugar Baby take not one, not two, but THREE candy bars. He picked a Hershey bar, a Snickers and a bag of Skittles.
We talked a bit and then it was back in the car to drive home and contemplate what the night would bring. The Sugar Baby took a brief snooze in the car after all the exercise and candy. 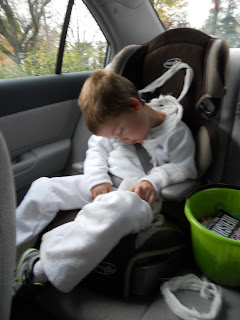 By the time 6 o'clock rolled around, I was wiped out, but I saw some of the neighbors put their lights on. People were posted frantically on Facebook: "Are you going out tonight?" "Who's trick-or-treating?" "You can't cancel Halloween!"
So Mr. Goodbar and the Sugar Baby headed out into the vast unknown while I stayed behind to hand out full-sized Twix. One gaggle of teenagers nearly wiped out my full supply.
An hour later, the crew returned with a bucket brimming with candy. We dumped it out and began the ritual sorting.
As you can see, there wasn't anything particularly unusual, except for the Toy Story notebook. What was surprising was the absence of certain candies. No Smarties! No Necco Wafers! No pennies! The selection was kind of disappointing, really. I mean, it's great that he got such an abundance of top-tier candy bars, but it's nice to have a little variety. 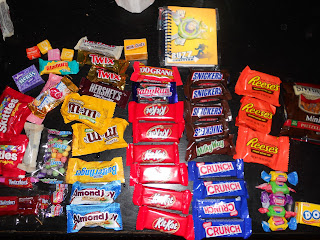 All in all, it was the weirdest Halloween ever. Some kids went out, others waited until the rescheduled Halloween that took place this past Saturday. (Friends are reporting that it was just creepy. Desolate streets and hardly a spooky Halloween atmosphere.) Let's hope the rescheduling of Halloween never happens again. 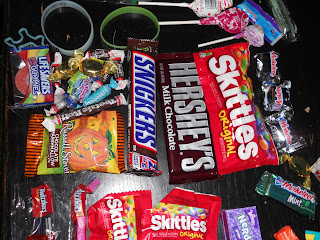 And oh, as far as Father John, his Halloween wish came true! He had 262 trick-or-treaters and he had to run down to the corner gas station to get more candy. Now that's some Halloween spirit!
Posted by Candy Yum Yum at 11:58 AM No comments:

Q: Why did the vampire love this year's Halloween?
A: Because it was a giant suckfest. 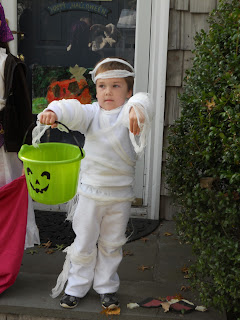 I began writing a detailed post about all of the elements that went into making this the most bizarre Halloween ever, but it was too painful to relive. So here's what you need to know:
1) Snow in New England.
2) School is cancelled.
3) The First Selectman cancels Halloween and reschedules it for this-coming Saturday night.
4) The vertigo which I've been experiencing for 3 months now takes a wicked turn for the worse.
and then this:

I took the Sugar Baby to my parents' town for the afternoon trick-or-treat in the downtown shopping area. On the green, all the local politicians and police set up booths where they give out candy and fliers. There was one table being manned by some grouchy old men offering up lollipops. The Sugar Baby took one just as another kid grabbed a handful, so one of the old men said loudly, "Just take one!" This freaked the Sugar Baby out, so he reached into his bucket and pulled out a Butterfinger, which he tossed back into their pile of low-rent lollipops. Oh the horror! A bad trade! I couldn't really reach back into the pile and pull out the Butterfinger, so we just moved on. But it was that kind of day. 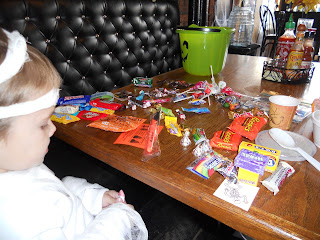 Tired, dizzy and hungry, we took a short break where I had some soup and the Sugar Baby began sorting his loot, including the two glow-in-the-dark bracelets with politicians' names on them. (Who thought of this brilliant idea? Don't they know these are going straight into the landfill?)
So how did the rest of our Halloween go? Did we follow the rules and stay in on Halloween night, or were we rebels, hitting the streets as soon as the street lights went on? Stay tuned ...
Posted by Candy Yum Yum at 8:45 PM No comments: