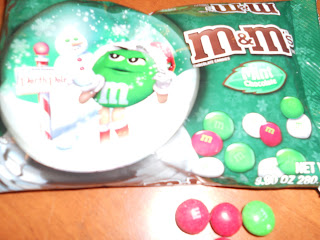 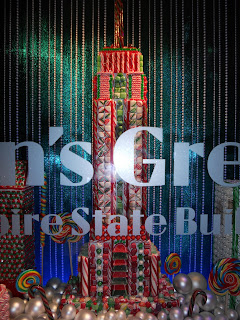 I'm not exactly sure why I thought going to the top of the Empire State Building last weekend was a good idea, considering I've had vertigo for four months and it was one of the busiest weekends in the city all year. Nevertheless, up we went. It was great and all, but the real treasure was at the bottom. A candy replica of the sky scraper! So very cool.
Posted by Candy Yum Yum at 7:46 PM No comments:

Christmas Gift Idea #2: Made in the U.S.A. candy canes! 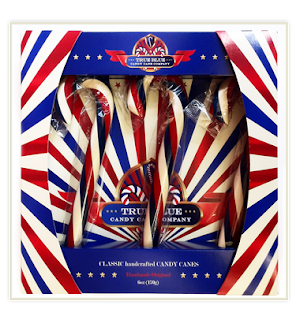 You've heard me complain about candy made in China before and at this time of year I always seem to get a few e-mails from people asking about candy canes. I was so excited when I received a press release yesterday about a new candy cane on the market. Check this out: True Blue Candy Canes are red, white and blue candy canes for a cause. Twenty-five percent of profits from the candy canes benefit the Marine Corps Law Enforcement Foundation, which assists children who have lost a parent in the Marine Corps by allowing them to pursue higher education.

In 2009, Alexander Lynn—just 18 at the time—vowed to help families of U.S. service members after his cousin returned home from a nine-year assignment in the Marine Corps. It was just two weeks before Christmas, and Alexander glanced at his Christmas tree laden with candy canes, and the idea of True Blue Candy Canes dawned on him.
Each True Blue Candy Cane is handcrafted by Hammond’s Candies of Denver. True Blue Candy Canes can be purchased online at truebluecandycanes.com.
Now, as is usually the case, these are more expensive than made-in-China candy canes. They're $9.99 for a box of three (don't choke!), but it should be noted that these are big and substantial. (I haven't tried them, so I can't comment on the taste.) And, of course, $2.50 goes directly to the charity. So it all comes down to how strong your political leanings are.
Posted by Candy Yum Yum at 5:11 PM 2 comments: