There's always lots of candy news coming my way, but I thought this particular tidbit would be of interest. Spangler has announced it's boosting its candy cane facility in Ohio. This is good news for folks who have to go on a wild goose chase at Christmastime looking for an American-made candy cane. Hooray! And now back to preparations for the upcoming Halloween 2011 season.
Posted by Candy Yum Yum at 3:01 PM 2 comments:

Labels: candy canes, made in America

Just sitting around, waiting for Irene to come knockin' on the door. In the midst of some mindless surfing, I found this at This Old Chair: 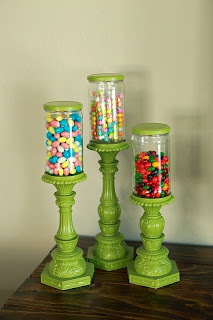 Don't you just love these? They're candlesticks that have jars hot-glued to the top of them. So fun!
Posted by Candy Yum Yum at 9:52 PM No comments:

Necco gets with the program

The very fabulous June brought this to my attention: 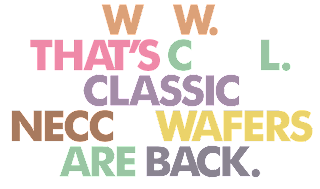 Oh man, the image didn't transfer. Those "O"s are all Necco wafers. In any case, looks like Necco is finally getting on the retro bandwagon. What's your favorite flavor? Mine is the cinnamon, otherwise known as white.
Posted by Candy Yum Yum at 8:25 PM 1 comment:

I have someone new to introduce you to. Well, actually not new. I've written about my friend Kristina-from-Florida-now-from-New Hampshire before. (You might remember; she's the one who works at Lindt and is in charge of making sure the bunny car doesn't hop off.) In any case, she got married last weekend so she has a new name! She's now Mrs. Chocoletti. Well, not in real life, but her new name is pretty darn close and that's how she'll be referred to here from now on. 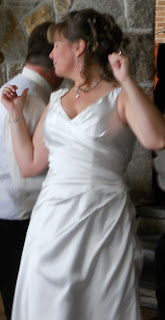 Mrs. Chocoletti is in ecstasy over the thought of getting out of this dress and finally eating some chocolate after a six-month hiatus.
As you might guess, she had Lindt chocolate as the favors for her wedding. All the guests got to chow down on dark raspberry truffles while she ran around and said hellos and did dances and made toasts. A couple of nights before, however, the girls went out to celebrate her last few days of being able to own cheques with Hello Kitty on them pre-marriage bliss and she gave me the most enormous bag of truffles you'd ever want to see. There is no picture because I forgot to take one and the truffles have since been divided up, hidden and otherwise stowed away. But there must have been ten pounds of truffles in that bag. In amongst the mint, milk chocolate and white truffles were these: 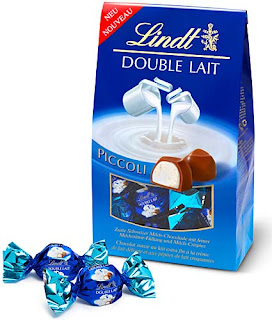 Double Lait. Allow me to describe: a milk chocolate shell with a smooth, tangy white filling, almost like a yogurt. In there are some little crunchy bits. Creamy, crunchy, tangy. I love these. LOVE these. Quite surprising, because I would've never picked them out on my own, but I couldn't stop eating them. I think I've finally had my fill though. Now about those other nine pounds of candy ... that's another story.

Nine out of ten dentists approve!

When this shows up on your doorstep, you know it's going to be a good day: 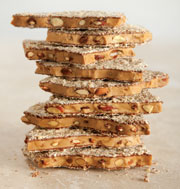 Last week I received a sample of Enstrom Almond Toffee. There are people who are totally gaga for toffee; I am not one of them. In general, I can take it or leave it. However, when toffee is really good, then I turn to hoarding mode. This, as you might guess, is really good toffee. Here's what makes it a winner: 1) There's a good balance of chocolate to toffee. Just enough chocolate to get the meltiness and the taste, while not overpowering the toffee; 2) the almonds are big and whole, which is always a good thing; and 3) the toffee doesn't stick in your teeth. I'm not sure how they managed to produce a toffee that I don't later have to pick out of my fillings, but they've done it.
The toffee came packaged in a sturdy, elegant box, so this would make a great gift. (And good price point, too: $19.95 for a one pound box, which goes a long way.) www.enstrom.com
Posted by Candy Yum Yum at 8:19 PM 3 comments:

Yes, I'm still here. It's been a hot, humid summer in Connecticut, but that hasn't stopped one serious chocolate lover from selling her hand-crafted chocolates at the local farmers' market. Check out my story here. 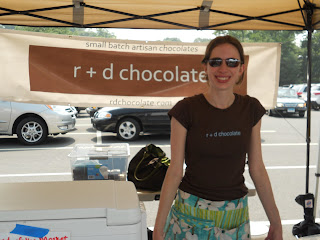 Posted by Candy Yum Yum at 5:50 PM No comments: