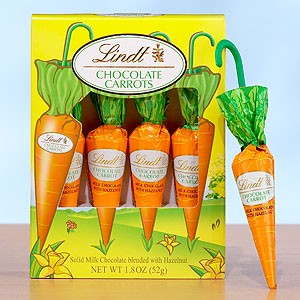 I hope the Easter Bunny was good to everyone this year. In the House of Yum, the Easter Bunny went kind of easy on the candy since he knows that the Sugar Baby has a second appointment this week to get some cavities filled. Apparently he did a lot of shopping at Trader Joe's, too, as there were TJ's gummy bunnies, malted milk eggs, peanut butter eggs and jelly beans in the basket, along with some Lindt chocolate carrots. And with that, we say good-bye to candy season as things start to wind down. From here on out, our holidays are mostly candy-free and more focused on burgers and potato salad. It's the circle of life, folks.
But what about you? What was in your Easter basket?
Posted by Candy Yum Yum at 9:23 PM 1 comment:

Behind the scenes at Lindt!

This weekend I went up north to visit Kristina-formerly-of-Florida-now-from-New Hampshire. Mission: find a wedding dress. But who cares about that? The real news is that Kristina works for Lindt, so we got to do some fun things, like:

Check out the Gold Bunny Car! (I suggested she use this as her "going away" car for the wedding) 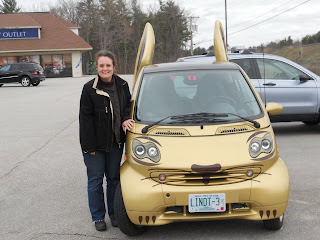 And, of course, taste some chocolate! After dinner, we did a sampling of some Lindt Excellence bars. (Which, I learned, are pronounced "Eck-sell-ahnce." Ooh lala.) We tried Intense Orange (which I've been anxious to try; I didn't realize they contained almond slivers as well), Black Currant and Chili. We also sampled a bar from their Passion line: orange and pistachio with milk chocolate. It's nice to see a bar with pistachios in it; that's almost as rare as finding a black currant-flavored candy in the U.S. 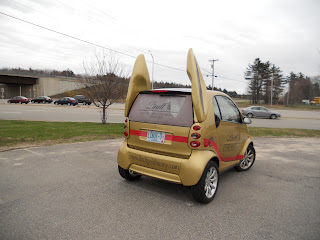 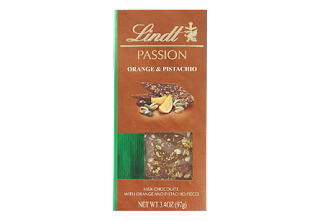 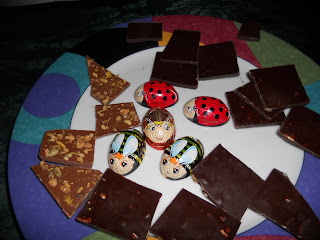 Kristina trusted me enough to send me home with cases of chocolates for her family and friends. I did have to pull over on the way home to take a break and yes, dig into a bag of chocolate eggs. Hey, at least I kept it all in the trunk so I wouldn't be too tempted.
Posted by Candy Yum Yum at 7:56 PM No comments:

Two items of note popped up in my e-mail this week. The first that caught my attention was this: Giant Foot-High Tootsie Pops to debut!
I was like, wow, that's pretty cool! Turns out, though, that it's a 12-inch-tall lollipop-shaped CONTAINER that holds 10 assorted-flavor Tootsie Pops. Nary so exciting.
The other item is that Grape Pop Rocks are coming back in honor of their 35th anniversary! Woohoo! What's scary to me though, is that not only do I remember grape Pop Rocks, but I didn't realize they weren't being made anymore. Apparently there's a gap in my memory there. Seems like just yesterday I was buying a pack of them. I can still feel the painful little snaps on my tongue.
Posted by Candy Yum Yum at 9:28 AM No comments:

I've been meaning for weeks to try making these adorable barnyard truffles created by the folks at Dove Chocolate Discoveries. They kindly sent me some chocolate to try out my mad candy-making skills, but I haven't had a free second. In any case, I wanted to post the recipe so you all can maybe try making these before Easter. I will get to mine soon, hopefully; maybe in time for the Sugar Baby's Easter party at school. My fave is the little lamb. For the recipe, go to the Dove Chocolate Discoveries Facebook page here. (PLEASE NOTE: updated link!)
Posted by Candy Yum Yum at 11:47 AM No comments:

Ladies and Gents, the Moment I've Been Waiting For: Coconut Twix 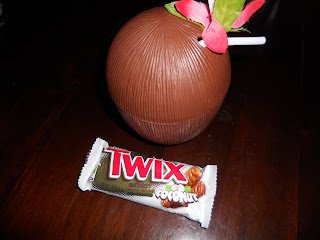 Ever since I first learned that Twix was going to be releasing a coconut version, I've been obsessed. I was envisioning a stick-like version of a Girl Scout Samoa--cookie, toasted coconut, caramel and chocolate.
This week, a box arrived on my doorstep with some cool Twix swag and a single, solitary Twix Coconut bar. 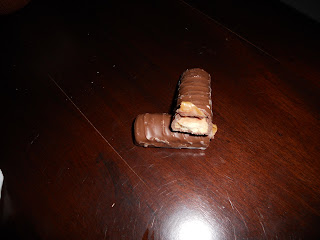 Here's the deal. When I opened the package and took a whiff, there was no overwhelming coconut aroma like I expected there might be. I broke one of the fingers in half and looked for the coconut, but there wasn't any. Turns out, the caramel (or maybe the chocolate, but I think it's the caramel) is coconut flavored. I gotta say, I was kind of disappointed that there wasn't any real coconut in it. But it is what it is, which is a Twix with a twist. It was good. I enjoyed it and yes, I'd eat another one, but at the end of the day, I have to admit, I prefer the plain original version.
Posted by Candy Yum Yum at 9:07 PM 2 comments: 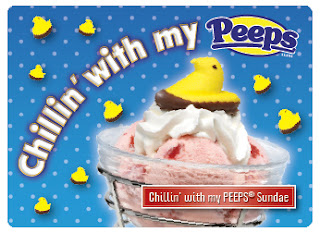 Check it out, peeps: Friendly's has a new sundae that features a chocolate-dipped Peep. Love it!
Posted by Candy Yum Yum at 5:55 PM No comments: 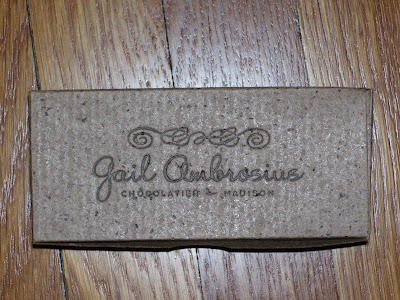 You'd think I would have learned my lesson by now. I simply cannot leave any good chocolates sitting on my desk because they mysteriously disappear overnight. I know it's not the cat, because he's too lazy to get up on the desk. It's not the Sugar Baby, because he has access to his own sweet shelf. So that leaves only one other culprit in the house who's been eating my chocolate, the most recent acquisition being Gail Ambrosius Parisian Pralines. When I first heard "pralines," my thoughts turned to the New Orleans variety-- brown sugary pecan patties that are usually overwhelmingly sweet. That's not the case here. These were influenced by French chocolates, the kind that make you go "ooh lala!" 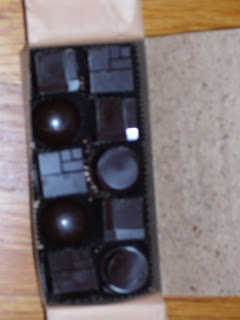 Visually, the chocolates are stunning. Each piece is like a mini architectural masterpiece. They seem to shout Frank Lloyd Wright.
But it's the taste that matters, right? The flavors are Pecan, Pistachio Bomb, Hazelnut and Orange Almond.
I went for the orange almond first, and was actually surprised that it wasn't more citrusy. I was expecting a tang, but instead the texture was what really stood out. The filling was crisp and nutty, very unlike any other chocolates I've had recently. My favorite was the pecan, which was like a tiny, crunchy pecan pie. They were all excellent and, like I said, beautiful to look at. Unfortunately, before I had the chance to really take any notes on the subtleties of flavor, Mr. Goodbar the Chocolate Thief had eaten through the whole box. I suppose that, in itself, is the best review possible.
Posted by Candy Yum Yum at 9:14 PM No comments: