It's time for the official analysis of Halloween 2013. As you may know, my friend Alex always sends This year, they split up and went to two different neighborhoods. First, one batch with an alarming absence of Reese's. What?! That's really quite disturbing. 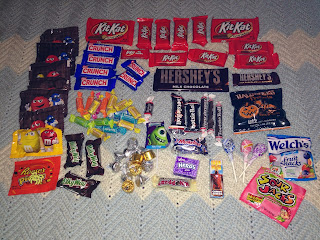 The second haul is so mainstream, I can't stand it. What was up with Halloween this year? 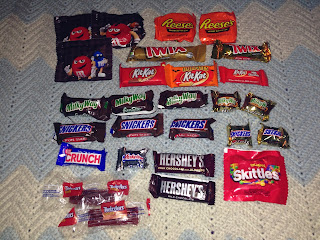 There's something important to be learned from these Halloween hauls, but I'm not quite sure what it is. Perhaps since it was the first Halloween we've had in two years, people were all about giving the "top" candies. I just fear the day when all the kids get are just Snickers and Skittles and they don't get to experience the joy of the random Necco wafers or bubble bath bottle.
Posted by Candy Yum Yum at 9:08 PM 1 comment:

For the first time in two years, we actually had a normal Halloween, uninterrupted by Mother Nature's havoc.
This year the Sugar Baby wanted to be something scary, so he picked out a Grim Reaper costume. By the time Halloween actually came, though, he was sick of wearing the mask, so he left it home, brought his wand with him and told everyone he was Harry Potter. Good enough.
The festivities started at school, where we had a non-candy party, due to class allergies. As soon as the day was over, the real party began.
First, we headed over to see Father John. If you're a follower of this blog, you know that he doesn't skimp. He gives out full-sized candy bars, and lots of them. Last year, he bestowed upon us some chocolate rats and Salem witches. 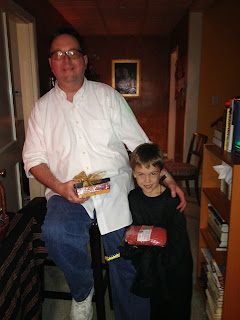 This year, however, he totally outdid himself. Check it out. 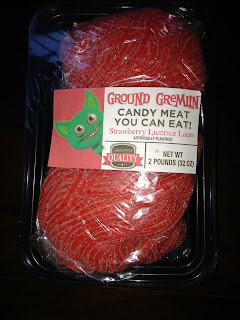 Yes, my friends, that is strawberry licorice that looks disgustingly like ground beef (or gremlin, in this case). How awesome is that?
Then it was on to Grandma and Pop Pop's, where they were recovering from Mischief Night. Yep, their tree was adorned with a single sheet of toilet paper. 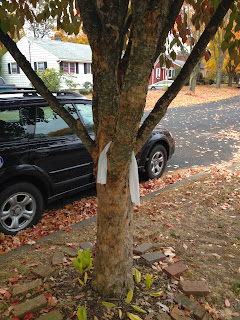 There the Sugar Baby scored a whole package of mini Hershey bars. Full-on trick-or-treating then ensued, this year in a friend's neighborhood. I told the Sugar Baby he was old enough to graduate from a pumpkin bucket to a pillowcase, because it was time to collect some serious candy. Here's this year's stash. 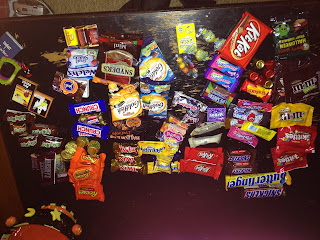 Sadly, though, there wasn't anything unusual. No political bracelets, CDs, leftover Easter bunnies, coupons for "spooktacular" savings or empty bubblebath bottles. (I'm still waiting for Alex's 2013 report.)
All in all it was a success, although there wasn't a single Mounds or Almond Joy, which is tragic. And one other note. Right as dusk was settling in, I got a text from my Partner in Crime. Her 10-year-old daughter was ditching her to go trick-or-treating with friends for the first time. This was devastating news, because it never occurred to me that the day will come when the Sugar Baby won't want me to trick-or-treat with him. I can't even fully process this. That is the biggest trick of all.
Posted by Candy Yum Yum at 8:44 PM 1 comment: