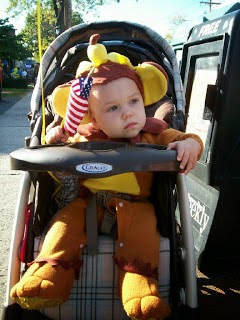 Well, he has now reached the milestone of going to the orthodontist. Yes, that's right. Due to brilliant planning on my part, the Sugar Baby* got expanders put in the week before Halloween. In addition to a new toothbrush, an envelope full of wax and some little tooth-pokey things, he received this. 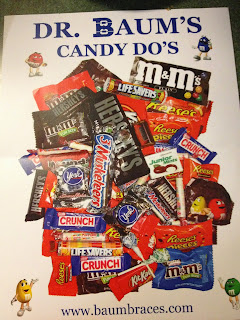 Now, take a good look at that picture. It meant to make you feel good, like, "Hey! I can still chow down on my Halloween stash." But what you're not seeing is what people really give out. Snickers, Milky Ways, Skittles, Laffy Taffy, Airheads, Butterfingers, Starbursts, Baby Ruths ... all the good stuff that you get a ton of.
Here's a picture of this year's haul: 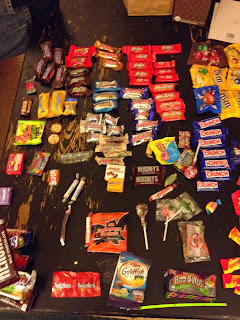 (Note the glaring absence of Dum Dums. This is a Halloween first.) The doctor promised that he'd give kids $2 a pound for any Halloween candy they brought into him. At first, the Sour Patch Kid was excited and devised a plan to spend his new-found riches on a video game. Then he realized that he would probably max out at $2.50 and couldn't be bothered to bag it all up. It's now sitting in my cupboard where it will remain until next Halloween.

As per the annual Laws of Halloween, we started off with an early visit to Father John. This year we were his first visitors. Somehow the SPK managed to score three full-size bars. 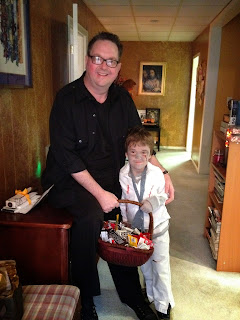 I, on the other hand, was treated to a fantastic bag full of "breakfast," as Father John explained. It was Jacques Torres' chocolate-covered corn flakes and Cheerios. (No picture because I shoved those babies into my gaping maw the next day). Then it was over to Grandma and Pop Pop's before joining up with a wild band of about ten other eight-year-old boys.
Alex the Super Shopper promptly sent me a picture of her son's haul, and it was alarmingly mainstream, as well. No shampoo bottle this year. (Read all about that here.) Thank goodness, though, that my friend Susan sent a picture of something awesome from her daughter's trick-or-treat bag: 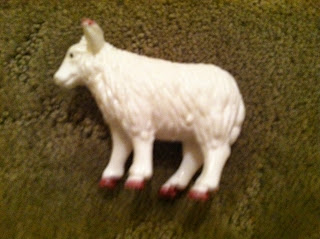 So there you have it. Halloween 2014 was certainly a success in that we didn't get a snowstorm or a hurricane and the Sour Patch Kid managed to score enough orthodontist-approved candies to keep himself happy for a week.

*In addition to being old enough to go to the orthodontist, he is also now old enough to know about this blog and the fact that he has been called the Sugar Baby for eight years. He is not happy about this and so, to respect his wishes, from now on he shall be called the Sour Patch Kid. *Sniff.*
Posted by Candy Yum Yum at 10:00 PM

Well, it's about time to read about Halloween .... it's almost Thanksgiving!!!
Halloween in FL was fun ... we went to a neighborhood where all the houses were decorated. The grandkids left some candy here so that their parents wouldn't confiscate it! (hmmm...grandma has been enjoying a piece or two every night!!!) The most popular item down here were bite-sized Milky Ways and Snickers. Most unusual were bags of chips, packets of juice, and hot chocolate to warm us up (since it was in the 70s and kinda chilly!)