Here's the Halloween update. Not only is the hurricane hitting as I type, but I also have the flu. Things are not looking good for Wednesday. School has already been cancelled for tomorrow and, if last year is any indication, it will be closed all week. "Well," you say, "at least you're holed up in the house with lots of Halloween candy!"
Wrong.
In an act of sheer stupidity, this was the year I decided to buy candy I don't like, so I wouldn't eat it all. (Not that there's really any candy I wouldn't eat, but a bag of Reese's would disappear a lot faster than a bag of those peanut butter molasses chews.)
So now I'm stuck with a bag of Starburst and these (which I thought were very cool, for the record.) Necco Candy Buttons in orange and grape flavors.


I've never seen individual packages of candy dots and I thought they'd be fun to dole out to trick or treaters. Hopefully we'll be having a make-up day because I'm not eating a whole bag of these things.
Posted by Candy Yum Yum at 7:20 PM No comments:

Are you kidding me? Is this some sort of cruel joke? Once again, New England is the target for some heinous weather. Due to power outages and downed trees, Halloween was officially cancelled in my town. It was truly the scariest Halloween ever.
But now the weatherman is saying that Hurricane Sandy will be arriving here on Monday. The First Selectman of my town has ALREADY declared a state of emergency. I should've known something like this was going to happen as soon as I took my Halloween cookies out of the oven: 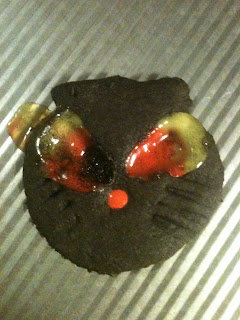 Scary, right? I followed the directions and put the candy corns on before they went in the oven. Unfortunately, they melted into a molten mess. (I will say, however, that the texture was pretty cool. I might want to experiment with putting candy corns into other baked goods.) For the second batch, I put the candy corns on AFTER, and they came out better, although Mr. Goodbar said they were the creepiest cookies he'd ever seen.
Posted by Candy Yum Yum at 8:13 PM 2 comments:

Did that get your attention? Check this out: Lindt is kicking off a new promotion ("Chocolate Beyond Compare") by giving away one MILLION bags of Lindor Truffles. How do you score one? Easy.

Posted by Candy Yum Yum at 4:34 PM No comments: