I want to be the Queen

This is fabulous. I was watching Antiques Roadshow on Monday night and I don't even remember what the item was that they were looking at, but the dealer said, "This came from the Kingdom of Kandy in Sri Lanka."
Hello! How cool is that? The Kingdom of Kandy!! I can only imagine that it looks all sparkly with sugar. Necco wafers line the streets, buildings are made out of gum drops, the trees grow candy instead of fruit... This made me so happy to think about. Maybe someday I'll re-create my own version of the Kingdom of Kandy, complete with a Kandy Kabinet and a Kandy Kourthouse.
Posted by Candy Yum Yum at 8:33 AM No comments:

I couldn't resist buying one of the 1oo Grand bars with coconut. Yesterday, I split a piece of it with a coconut aficianado. "You know what this tastes like?" I asked him.
"Wait," he said as he chewed. "Yep, just like a Girl Scout cookie."
Yes, the 100 Grand with coconut tastes just like a Samoa. The first thing I noticed about it was that the caramel seemed softer than in a regular 100 Grand. The toasted coconut kind of blends with the crisped rice giving it that cookie taste. Pretty good.
In other news, Hershey has said that it's going to cut down on its Limited Editions. Apparently they were good for drawing attention to the original candy bars, but not so good as overall sellers. But that Elvis peanut butter cup is still scheduled to come out this summer.
Posted by Candy Yum Yum at 8:22 AM No comments:

The Snicker's Dark reminded me of an experiment I conducted a few Christmases ago. I wanted to see if I could make a homemade Mallo Cup with dark chocolate. I got some good-quality Belgian chocolate and melted it, then lined little foil cups with it and let it harden in the fridge. I toasted some coconut and mixed it with marshmallow fluff, then filled the cups with it and topped them off with more melted chocolate. Verdict: they were YUMMY!
Posted by Candy Yum Yum at 9:54 AM 1 comment:

I was really psyched to see the limited edition Snicker's Dark. Now here's a candy bar I can really dig, I thought. I love dark chocolate. I love Snicker's. What's not to like? Well... I hate to say it, but I didn't love it. The dark chocolate somehow enhanced the flavor of the nougat, which seemed to have a fake peanutty taste to it. It just didn't satisfy the way a regular Snicker's does. Very sad. In other limited edition news, I was reading about Nestle's Crunch and 100 Grands with coconut over at Sugar Savvy. Sounds intriguing. I was never a big coconut fan pre-pregnancy, but those Coconut Cream Easter Eggs last year really did something to me. Oh man... now I'm craving one. And I can't even blame it on Henri.
Posted by Candy Yum Yum at 9:37 AM No comments:

I tried the Hebert's raspberry bar. The verdict: the filling is really good, very tart berry flavor. If they'd only use better quality chocolate, these bars would be a lot better. But then again, it isn't purported to be "fine" chocolate, so I guess for the price, they're pretty good.
Posted by Candy Yum Yum at 10:44 AM No comments:

Two of my most favorite candy holidays are just around the corner: Valentine's Day and Easter. When I worked at the chocolate shop, these were the two worst holidays. Working during the week leading up to the actual day, you'd go home feeling like you were run over by a truck. I'd strip off my uniform of white pants, white shirt and burgundy apron and leave it in a corner of the bathroom because it was permeated with the smell of chocolate. (Certainly one of the best aromas to be stuck with, but still, after 12 hours of turtles and bark, you're ready for a big salad.) Working on Valentine's Day itself was always fun, though. That's when all the guys would come rushing in at the last minute, ready to drop enormous amounts of cashola on any candy they could get. One guy had us slip a diamond ring over a chocolate covered pretzel. Ah, love. The day before Easter was always the worst. Hundreds of crazed moms who'd get all pissed off when we ran out of Jelly Bellies and they'd have to buy the big, fat sugary pectin jelly beans.
So now the stores are gearing up for these holidays. I saw milk chocolate raspberry Hershey Kisses, which frankly sounded way too sugary sweet and artificial. I also saw miniature Reese's hearts, which I've never seen before. As for Easter candy, I saw Cadbury orange cream eggs. I love orange and chocolate, but I just could never get into cream eggs, so I'll leave those for someone else to try.
Posted by Candy Yum Yum at 8:09 AM No comments: 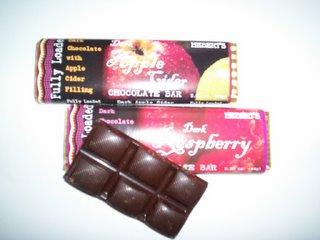 I was in CVS yesterday desperately hoping they sold silver polishing cloths so I wouldn't have to go to evil Wal-Mart, where I know they sell them. No such luck; I had to go to that vile cesspool of American greed. But I digress. While at CVS, I found these: Hebert's "Fully Loaded" candy bars. When I first saw the name, I thought they'd be full of peanuts and raisins and crispy rice and all that kind of stuff. But no, these came in the following flavors: Dark Bananas Foster, Dark Apple Cider, Dark Lime Margarita and Dark Raspberry. Yes, I'm still on my diet, but how could I resist these? I got all the flavors except the lime margarita. Anything that even connotes a relationship with tequila sends my stomach churning.
I've only tried the Bananas Foster. The wrapper says "Dark Chocolate with Banana, Cinnamon and Brown Sugar filling." The first sniff reminded me of something... I think it's the same smell my Easter basket used to have, a kind of fake chocolate smell mixed with sugary jellybean type of aroma. The center is a soft white fondant. I was glad to see it wasn't a screaming yellow. At first the banana taste seemed subtle and I thought I could barely taste it, but I've since amended my thoughts on that. It's definitely banana, although if I tried it in a blind taste test, I'd probably say rum. The filling is sweet, so it's nicely balanced with the dark chocolate. I gave a piece to a notorious banana-hater and he said, "Oh yeah, that's banana." But he liked it. He said the chocolate wasn't as bitter as he usually likes dark chocolate to be and that it had a quality that reminded him of milk chocolate. Almost an alkalinity.
The bars were 2 for $3, a bit pricey for a candy bar. But the banana one was good. Here's what I like about it: it's like the creams you'd find in a heart-shaped box of candy. You don't find that in any other bars. I'll write back when I try the others.
Posted by Candy Yum Yum at 2:41 PM 6 comments: 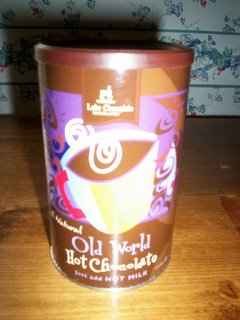 I first tried Lake Champlain's Old World Hot Chocolate in Vermont and after one taste, I knew I had to buy some. This stuff is so thick and chocolatey, the way hot chocolate should be. Of course, it wasn't until I after I bought it that I looked at the ingredients: semi-sweet chocolate. That's it. Yes, this is a can of shaved chocolate that you mix with hot milk for a steaming cup of cocoa. No wonder it tastes so good. It's essentially a melted candy bar.
Posted by Candy Yum Yum at 8:57 AM No comments:

Well, it's the new year and it's been eight months since I had Henri, so the inevitable had to happen. I'm on a diet. I've joined in a challenge with my sister-in-law and her husband to see who can lose the greatest percentage of weight by April. Needless to say, the candy jar is looking pretty bleak. I have a big bowl full of York Vanilla Mint Patties and Kit Kat mint dark chocolates, which I wrote about on Sugar Savvy, so I need to get rid of them soon. But I'm not completely on the candy-free bandwagon. I'll still be keeping my eye out for fun stuff and of course, at least writing about it. The winner of the competition gets $150. That could buy an awful lot of Easter candy...
Posted by Candy Yum Yum at 4:04 PM 2 comments:

Yes, Patti, there is a Santa Claus 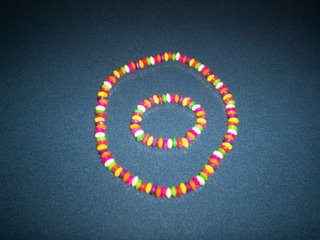 When I wrote up my wish list, I never, ever thought I'd really get a necklace and bracelet that looked like candy. But lo and behold, look at these beauties. They're beads, not candy! I am one fashionable candy chick, let me tell you. Thanks Santa!
Posted by Candy Yum Yum at 4:26 PM 2 comments: 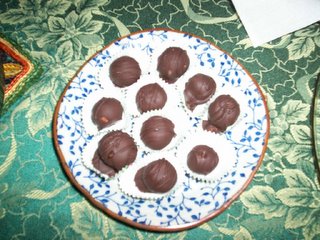 I know, they sound disgusting. But believe me when I say they were a hit at New Year's. I got the recipe from "The New Taste of Chocolate: A Cultural and Natural History of Cacao with Recipes." The recipe was very simple and called for Camembert, goat's cheese, Stilton or Gorgonzola. I used a goat's milk cheese with cranberries and dark chocolate. The sweetness of the chocolate was a perfect complement to the sharpness of the goat cheese. It was almost like eating a piece of chocolate-covered cheesecake.
Posted by Candy Yum Yum at 7:33 PM No comments: