Let's just pretend I posted this pictures all cuckoo on purpose. Call it artistic expression. I'm working with Windows 8 now, and I don't think I've ever hated a piece of technology more. I borrowed a copy of "Windows 8 for Seniors" from the library, but I only got halfway through before it was due. Clearly I need a tutor. In any case, this is just a random post of some recent goodies.
As you can see, I found a bargain at Target. I got a Sweet & Salty Bark and a Candied Orange Bark for 48 cents. (They weren't close to expiring, so I figured I was safe. I'm guessing these are going to be discontinued.) I actually really liked these. They were a good amount of chocolate without being too much and I liked the combination of flavors. My only regret is that I should've bought more. 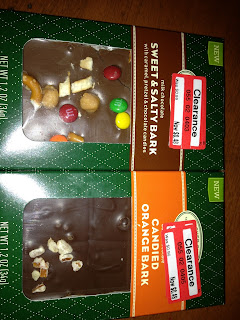 And here, if you turn your computer upside down, you can see the new m&m's chocolate bar. It's a candy bar with mini m&m's embedded in it. There's not much you can really say about that except, yum! 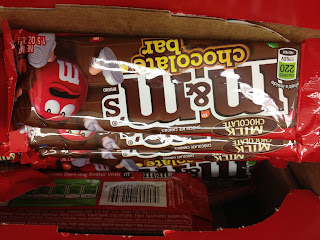 And these beautiful truffles from See's. I really love See's candies because they taste great, they're American-made, they ship well and are affordable. They're definitely a permanent selection on my gift-giving list. 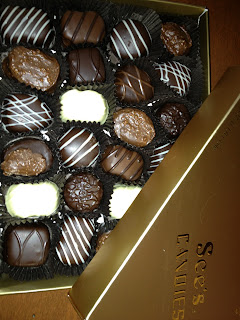 Lastly, there's this deliciousness: Alter Eco Dark Quinoa Organic Chocolate. I wrote about some of Alter Eco's other flavors here, and I loved them so much that I knew I had to try the quinoa one when I saw it at Whole Foods. This chocolate is so fruity and smooth and the quinoa gives it a nice crunch. I only wish that Mr. Goodbar hadn't found the second half in my secret drawer and eaten it. 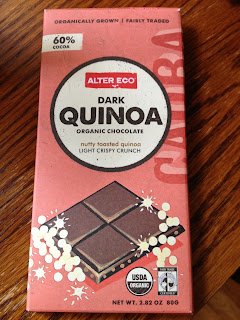 One of the new candies to debut this year is Sour Punch Punchies. I'll admit, I've had a package of these sitting on my desk for a couple of months now because, for some reason, I figured they'd taste like every other sour, chewy candy out there.
I just learned, however, that I was wrong. The Punchies are little balls with faces on them that come in lemon, strawberry, tangerine, blue raspberry and green apple flavors. The thing that sets these apart from say, Skittles or Sour Patch Kids, is the texture. They're interestingly chewy, almost like licorice, but with a big sour taste. (It's no surprise, I guess, since they're made by the American Licorice Company.) 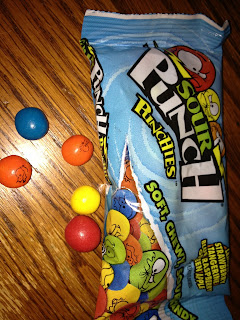 Here's a selling point: these don't stick in your teeth like other chewy candies, so if you're looking to cut down on dental bills, these might be the candies for you.*

*This product is not endorsed by my dentist, particularly since all of my paychecks will already  be going to her for the crown on my tooth that was cracked by a jawbreaker.
Posted by Candy Yum Yum at 9:28 PM 1 comment: 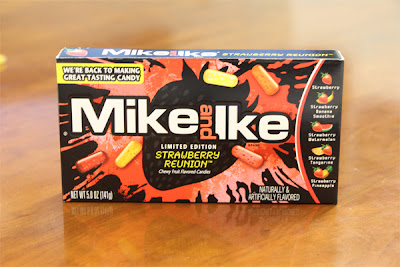 It's giveaway time, Yumsters! I've been negligent in writing lately, so I'm going to make up for it with a fun summer giveaway! Let me introduce Mike and Ike Limited Edition Strawberry Reunion. This is a perfect summer candy in fun flavors like Strawberry Banana Smoothie, Strawberry Watermelon, Strawberry Tangerine and-- my favorite-- Strawberry Pineapple.
Here's what you're playing for: two lucky Yumsters will receive the new Mike and Ike Strawberry Reunion as well as one box each of all the other flavors in the Mike and Ike lineup for a grand total of six boxes each. Sweet, right?
So here's all you have to do. Leave a message on this post telling me your favorite way to enjoy strawberries. Maybe you're a shortcake lover, or perhaps a daiquiri kind of person. Be sure to leave a way for me to contact you, too. U.S. residents only. Two winners will be selected at random on July 12 at midnight (or more likely, sometime the next day. But the cut-off is midnight.)
Posted by Candy Yum Yum at 9:07 PM 4 comments: